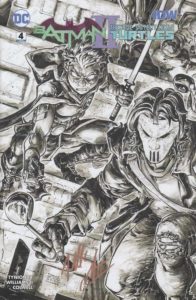 Freddie E. Williams II Convention Exclusive cover by Freddie Williams II.  A third-party printed cover that replaces the original Cover A (which was removed); cover four of six Batman/TMNT II covers that connect to form a single image.  Signed by Freddie E. Williams on the front cover and accompanied by a signed Certificate of Authenticity (COA).