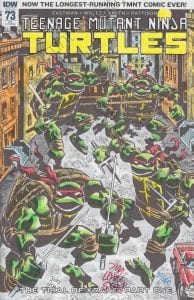 Retailer Exclusive (RE) TMNT: A Collection cover by Jim Lawson.  Commemorating TMNT #73 from IDW becoming the longest-running TMNT title ever; initially funded and made available via Kickstarter.  Limited Edition (1 of 50) Jim Lawson Hand-Colored and Hand-Numbered (#30/50) variant available only via Kickstarter.  Signed by Jim Lawson on the front cover; signed by Rich Horn on the back cover.