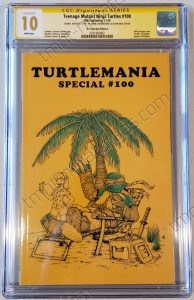 This variant cover was created by a UK shop (Sad Lemon) and they had 250 copies printed.  In an attempt to mimic the original Turtlemania Gold print quantity of 10 copies, Sad Lemon announced they were going to destroy all but 12 copies (10 copies to be sold, 1 copy for the artist, 1 copy for the shop).  You can watch the video of Sad Lemon destroying the 238 copies in my TMNT Comic Book Collectors FB group – here’s the link to the video (you’ll have to join the group first).  This decision to destroy most of these variants was very controversial and caused passionate discussion amongst fans as well as anger directed towards Sad Lemon, the shop owner, and IDW (for allowing this to happen).
Only 10 copies were put on-sale.  However, the 10 copies were split amongst Sad Lemon partner shops, making it even more difficult to acquire a copy when the variants went on sale – Amorphous Ink Comics (2 copies) / Sad Lemon Comics (3 copies) / Mutant Beaver Comics (1 copy) / 7 Ate 9 Comics (2 copies) / The Comic Mint (2 copies).  As expected, these immediately sold out, leaving hundreds of comic book collectors with a bad taste in their mouth and the nearly impossible task of finding and acquiring this variant cover for their collections.  The 10 copies that were sold by the shop were sold for $500 each and came with a sketch by Kevin Eastman on the back, were numbered, and then CGC SS graded.  This CGC SS 10 #2 of 10 is my copy of one of those 10 official copies from Sad Lemon.
This explains why many times you’ll find this variant cover described as “Limited to 10 copies!” – those 10 copies were the only intended copies to be released.  HOWEVER…
What Sad Lemon didn’t anticipate is that IDW overprints every variant cover by about 10-15% and then these copies go directly to IDW for distribution to those involved with the book (writers, artists, etc.).  These copies are known as “comp” copies and are from the same print run as the copies that go to shops (i.e., they aren’t any different than the copies that go to shops).  IDW distributed these additional “comp” copies to those involved and then those copies were either retained by those that received them or were sold on the secondary market or given away.  So, although Sad Lemon only intended 10 copies to be available to the public, IDW’s “comp” copies increased the actual amount of copies available by an unknown number – estimated to be around an additional 50 copies.
This explains why you see 36+ copies graded in the CGC census even though the advertised availability was only 10 copies.