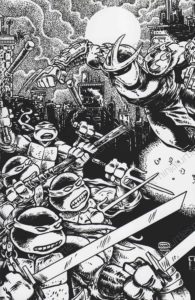 NOTE: This cover was not planned by IDW but was created to make up for the incorrectly distributed #35 Cover RE Kevin Eastman Fan Club cover (read more about that here).  This allowed Kevin Eastman to still have a special exclusive cover available at SDCC 2014.  This cover is simply a card-stock “wrapper cover” attached to 500 copies of TMNT #36 Cover B.  A signed “Kevin Eastman Fan Club Edition – Limited to 500 Copies SDCC 2014” sticker was placed on the inside front cover near the top.