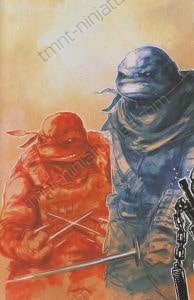 Retailer Exclusive (RE) Bishart.net/Kevin Eastman Fan Club/Tentacle 10 A joint-venture cover by Ben Bishop & Kevin Eastman.  Cover 1 in the set of 3 interconnecting covers.  Limited to 500; with COA #195 of 500 (for the set of 3 covers).

This is a copy from the second print run; the first print run was extensively damaged during transit and required a complete reprinting of all copies.

NOTE: Although the interior lists this variant as a “First Printing,” it cannot be considered a true First Printing for the following reasons:

This is being classified as a “Fifth Printing” because 1) it was announced and printed around the same time as the Fifth Printing (released February 2022) and 2) the Fourth Printing has a date one month prior (September 2021) to the date on this variant (October 2021).