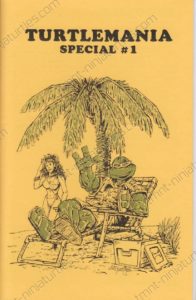 2019 Turtlemania Gold Anniversary Edition (1986-2016); limited to 50 copies.  Signed & numbered 01/50 on the back cover by creator Robert Wilson with Certificate of Authenticity signed (and stamped) by Robert Wilson.  NOTE: only the first ten copies were numbered – the remaining 40 copies were only signed.