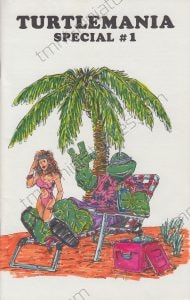 HAND-COLORED EDITION (1 of 100).  An extremely rare and obscure variant hand-colored by Don Oropallo.  Limited to 100 copies.  Acquired by the original owner at the Turtlemania event in May, 1986.  Accompanied by the original Turtlemania Event Flyer that was distributed at the event (May, 1986).  See details below.

My quest for this Hand-Colored Edition started innocently enough back in 2012 when I was contacted by someone who had found a Hand-Colored Edition at a yard sale.  They sent me a picture of the book and, based on the information I had at the time, I informed them that it was nothing special; just a Regular edition that looked to have been colored by someone (which anyone could have done).  Although it was cool, I didn’t even bother to make an offer on it.  Fast forward to 2014 (just after I went live with tmnt-ninjaturtles.com) and Don Oropallo got in touch with me to let me know that my collection was missing a very rare and scarcely-known variant of Turtlemania Special…The Hand-Colored Edition.  Don provided all the details about the book but he never sent me any pictures of it.   However, when I sent Don the picture of the copy acquired by the yard sale buyer, he confirmed that it was, indeed, a copy of the Hand-Colored Edition he created.  I spent the next 3+ years trying to track down another copy of the Hand-Colored Edition before I finally stumbled across another collector that had a copy.  Here are further details about this Hand-Colored Edition of Turtlemania Special.

However, a few years ago, a new variant of Turtlemania Special surfaced and came to my attention.  Since then, I’ve been working to validate its authenticity and track down and acquire a copy.  Today, I’m pleased to be able to confirm that this new variant of Turtlemania Special does, in fact, exist.  In addition, thanks to the graciousness of a fellow collector, I’ve finally been able to add this edition to my collection.  This new variant is known as The Hand-Colored Edition.