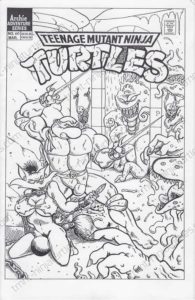 Also known as “The Birds, the Bees, and the Turtles.” Guest starring Ninjara.  An extremely adult-themed (i.e., pornographic) and ultra-raunchy TMNT “spoof” comic book produced by Bill Fitts for in-house Mirage Studios eyes only.  Bill created this small comic book (along with Dan Seneres on pencils and Steve Lavigne with lettering) and then gave it away as a farewell gift to his friends at Mirage Studios back in the early 90′s.  This was never intended to reach the general public.  Only 50 hand-numbered copies were created.  One un-numbered copy has surfaced, which has been confirmed to be a proof/file copy (found at Mirage Studios’ offices in Northampton, MA).