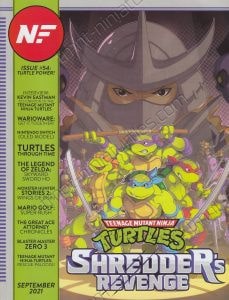 With folded poster of the front cover artwork.

Sing along with me! You know the words!

“They’re the world’s most fearsome fighting team! They’re heroes in a half shell, and they’re green! When the evil Shredder attacks . . . ”

Wait. That hasn’t happened for a long while. The Foot Clan fled. Krang went back to Dimension X. And Shredder himself hasn’t tried to whip up a fresh batch of turtle soup in, what, nearly seven years? Not in the context of a Nintendo system video game, anyway.

But you can’t keep a good villain down (even by dropping him into the back of a garbage truck), so we’ll soon see what nefarious plot old tinhead’s been cooking up throughout this latest era of absence. It’s nearly time for Teenage Mutant Ninja Turtles: Shredder’s Revenge!

This all-new take on the oldest toon Turtles is set to ignite a major explosion of TMNT nostalgia soon, and we’re here to do our part in amplifying that impact. So this edition of Nintendo Force features a full focus on the four famous Foot-kicking ninja brothers, bringing them back into their rightful place of standing in the Big N’s spotlight. Because though their video game adventures have been a bit inconsistent in the past two decades, there was a time when TMNT was a brand just as important to the NES as Mario, Zelda or Castlevania!

We’ll explore the full history of Nintendo system Turtles titles in our central feature, Turtles Through Time. We’ll give you a Shredder’s Revenge preview that will instantly inspire you to throw a pizza party. And we’re incredibly honored by the star of our Interview section this time around: Kevin Eastman, the man who actually first dreamed up the Ninja Turtles! He and Peter Laird co-created the first TMNT comic series that all other Turtles media sprang out from. There would be no TMNT games without him!