This past weekend at Colorado Spring Comic Con, I found out some really incredible information about two pieces from my collection that have always been a mystery. Years ago I acquired a set of Gobbledygook #1 & #2 that were already graded by PGX. PGX insisted

that these had been authenticated rigorously prior to being slabbed and graded and that they were submitted with provenance (although I’ve never been able to find out how they authenticated them). Regardless, these copies have a very unique characteristic that sets them apart from EVERY other authenticated copy of Gobbledygook #1 & #2 – the staples are in the front cover (not the spine) AND there are three staples in each (not two).

For years after I acquired these copies, most speculated that these were actually just poorly made counterfeits OR that they were the authentic copies that were disassembled to make all the counterfeit (yellow & blue) copies and then stapled back together on the cover instead of the spine. The latter didn’t seem likely because there are no staple holes in the spines where staples would have previously been before disassembly. Which meant that I’ve always dreaded the possibility of finding out that these were actually counterfeits. But not anymore! I talked to Kevin Eastman about them this past weekend at CO Springs Comic Con and I brought them to him so he could take a look. 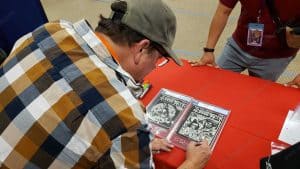 As Kevin looked them over, he recounted how he and Peter had experimented with different paper sizes for Gobbledygook and that they initially used a standard office stapler to staple those early prototype / test copies on the cover instead of in the spine. But, because they didn’t like how that stapling method caused some of the internal page artwork to be hidden, they decided to buy a long reach bindery stapler and then bound the entire production run of Gobbledygook books in the spine.

And with that simple 5-minute conversation, the mystery behind these copies of Gobbledygook #1 & #2 has now been solved – both of them turning out to be prototype / test copies that were actually made BEFORE the regular copies! Regular copies of Gobbledygook are ultra-rare in their own right (only 150 of each were made), but these copies are pretty much one-of- a-kind. Truly unbelievable pieces of Ninja Turtles history.