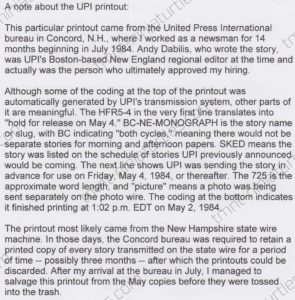 A note about the UPI printout:

This particular printout came from the United Press International bureau in Concord, N.H., where I worked as a newsman for 14 months beginning in July 1984.  Andy Dabilis, who wrote the story, was UPI’s Boston-based New England regional editor at the time and actually was the person who ultimately approved my hiring.

Although some of the coding at the top of the printout was automatically generated by UPI’s transmission system, other parts of it are meaningful.  The HFR5-4 in the very first line translates into “hold for release on May 4.”  BC-NE-MONOGRAPH is the story name or slug, with BC indicating “both cycles,” meaning there would not be separate stories for morning and afternoon papers.  SKED means the story was listed on the schedule of stories UPI previously announced would be coming.  The next line shows UPI was sending the story in advance for use on Friday, May 4, 1984, or thereafter.  The 725 is the approximate word length, and “picture” means a photo was being sent separately on the photo wire.  The coding at the bottom indicates it finished printing at 1:02 p.m. EDT on May 2, 1984.

The printout most likely came from the New Hampshire state wire machine.  In those days, the Concord bureau was required to retain a printed copy of every story transmitted on the state wire for a period of time — possibly three months — after which the printouts could be discarded.  After my arrival at the bureau in July, I managed to salvage this printout from the May copies before they were tossed into the trash.