This August, IDW will be launching a brand-new ongoing Teenage Mutant Ninja Turtles comic book series titled TMNT Universe.  The series will focus on telling the stories of the various supporting characters in the IDW TMNT world.  Read more about the new title here and check out the cover to issue #1 by Freddie Williams II below.  Whether you’re a collector or not, be sure to put this on your want list as these IDW #1 Turtles copies tend to get hard to find down the road.  See the official solicitation for TMNT Universe #1 below. 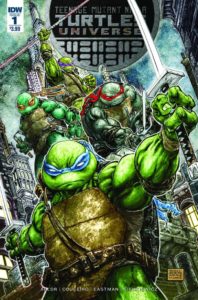 Introducing a new era in TMNT! This series will explore characters and story-lines that are pivotal to the IDW TMNT universe! When a mysterious new mutant targets Baxter Stockman, it will be up to the TMNT to reluctantly save him. Little does everyone know that a larger trap is being laid by a new arch-foe! Plus a back-up story from TMNT co-creator Kevin Eastman and comics legend Bill Sienkiewicz!