Recently I was informed about a Ninja Turtles appearance in a comic book that I hadn’t previously known about. The appearance comes in the form of artwork by Peter Laird & Michael Dooney on the inside back cover of The Aniverse #01 by WeeBee Comics (October, 1987). The artwork depicts Donatello next to Varcel.

2nd Printing – Inside Back Cover

While it’s always neat to find a new Turtles appearance, it’s not exactly newsworthy in and of itself. There are many instances of these types of Turtles appearances in mid-late 1980’s comic books – some of which I still likely don’t even know about. So, why am I writing about this new Turtles appearance? Simply because finding it is not as easy as you might think – but NOT because The Aniverse #01 is rare or hard to find. Confused? Let me tell you a little story.

As is typical when I find out about a new Ninja Turtles appearance in a comic book, I go online and buy a copy of the book containing the appearance. Pretty straightforward. So, that’s exactly what I did with The Aniverse #01. The book arrived a few days later and I was excited to get this Turtles appearance scanned in and then archived in my collection. I took the book out from the bag and board and quickly flipped to the inside back cover. To my surprise, there in front of my eyes was NOT an illustration of Donatello & Varcel as I had expected. Instead, I was staring at an advertisement for “Arrow Comics.” Immediately I figured I must have misunderstood where the Donatello & Varcel piece was located within The Aniverse #01 – it must be elsewhere in the book. So, I searched the entirety of the book and, to my surprise, it was nowhere to be found; Donatello & Varcel were NOT inside this book!

1st Printing – Inside Back Cover

Of course, now I’m thinking I must have purchased a different printing of the book. However, when I checked the legal info. at the front of the book, there was no printing designation at all. I went online to find more information and, yet again, could find no indication anywhere that there were multiple printings of The Aniverse #01.  I went back to the individual that supplied me the initial images and information about this Turtles appearance in The Aniverse #01 and received pictures of the inside information from his book. That information matched the information in my book completely – no difference. For a time, it was a mystery (although it was obvious there were multiple versions of this book). Soon, however, a fellow comic collector provided information that he inquired about The Aniverse #01 directly from The Aniverse creator Randy Zimmerman. Here’s what Randy had to say. “We went back for two printings on Aniverse 1. One that has an Arrow Comics ad on the inside back cover that was a short run, and the longer run has the Varcel & Donatello picture on it.”

I then compared the two copies to see if there were any indicators that could help identify / distinguish the two versions – especially by looking at the front cover alone. Aside from the inside back cover differences, the books are identical in almost every way – all interior pages are the same and there are no textual differences that set them apart. 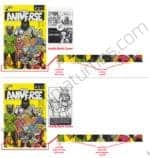 However, I was able to find one key way to identify the two versions by looking ONLY at the front cover. The 2nd printing cover artwork is shifted down and to the right just enough so that the very bottom of the 2nd printing artwork is slightly shifted and cut off (in comparison to the 1st printing). Two main things can be used to identify the 2nd printing. First, the line in the lower left corner doesn’t quite hit the corner due to the cover artwork being shifted slightly right. This line’s positioning is just a few millimeters short (to the right) of the lower left corner of the book. Second, there are two key lines (see images) that do not meet at the bottom on the 2nd printing due to the cover artwork being shifted slightly downward. Obviously, these are such a minor differences that if you didn’t know what to look for you’d never be able to tell.

There’s also one other (slightly less reliable) way that you could use to spot the The Aniverse #01 2nd printing issue by cover image alone. Due to the aforementioned cover artwork shifting on the 2nd printing, trim marks are visible in the upper right corner of the 2nd printing copy containing the Donatello & Varcel illustration. The only caution about using this method for identification would be that I have found 1st printing copies that have just a hint of these trim marks present in the upper right corner (although definitely not as visible and obvious – especially the inner vertical one). So, it’s probably best to use the trim marks indicator in conjunction with the aforementioned “bottom-of-the-cover” method. Doing so will pretty much guarantee you success in acquiring The Aniverse #01 2nd printing issue every time.

So, there you have it! A newly identified appearance of a Ninja Turtle in a 1980’s comic book – and a very unique appearance at that. Now you know the secret insider information for The Aniverse #01. If you can get the actual cover image of the copy someone is selling, you’ll be able to know for sure whether it’s a 1st or 2nd printing. Just make sure the seller isn’t using or providing a stock image that they found online and that they are providing the actual cover image of the copy you are buying. Happy hunting!