Just heard that there’s supposed to be some big TMNT news tomorrow.  Keep an eye on EW.com.  What could it be?

Not sure if any of you have seen this before but it’s totally cool.  Wouldn’t it be great if this is what the TMNT look like in the next movie?

Something I haven’t seen discussed a whole lot in the other TMNT blogs and forums is the humor embedded in Nickelodeon’s re-imagining of the TMNT.   We all know how “campy” the humor was in the original cartoon.  As kids it may not have seemed so bad but if you go back and watch an episode now as an adult it is just outright lame (almost insultingly so).

In the animatic we saw of Nickelodeon’s TMNT pilot I was pleasantly surprised by the embedded humor.  It never seemed forced and it had great comedic timing.  The jokes were legitimately funny and proper for the surrounding dialog, setting, and characters.  In the past 10 or years we’ve all come to expect so much more from our cartoons and movies.  Disney, Pixar, and Dreamworks have raised the bar with humor in animated movies like Shrek, Toy Story, and Bolt.  These are great movies that you don’t mind seeing with your kids because you know they’re targeting adults just as much as kids.  However, on the flip side, there are animated movies that are purely for kids and are just absolutely painful to sit through as an adult.

END_OF_DOCUMENT_TOKEN_TO_BE_REPLACED

When we got to the Nickelodeon TMNT Fan Event we received badges that had our names and identified which “Sewer” (Breakout Feedback Session) we were in.

Then the staff asked us to take some index cards and a pen to write down any questions we might have during the course of the day.  I grabbed a small handful but ended up using 3 or 4 to write questions on.  I have a few left so I’ll send one card each to the first 3 (non-event attenders) that leave a comment on this post.  Also, I couldn’t resist asking Rob Paulsen to sign the front of one of them.  😉
END_OF_DOCUMENT_TOKEN_TO_BE_REPLACED

With what I revealed in my last post you’re all probably thinking, “What about the non-disclosure or confidentiality agreement you signed?”  Well, let me provide you a bit of information.

When each of us at the TMNT Fan Event were initially contacted by Nickelodeon one of the things that was required for all of us to be eligible was to return a signed release form.  This release was sent to us as an email attachment named “TMNT Confidentiality Release.”  Within the document was wording to the effect of “I agree not to photograph, record, etc.” any of the event itself and “I agree to be photographed, recorded, etc.”  In addition, all the photos, recording, opinions, etc. would be the exclusive property of Nickelodeon and could be used as they see fit.

In re-reading the language of the release, nowhere does it state that we are not permitted to share information we learned at the event.  I think where the waters got “muddied” was the requests from Nickelodeon staff members (prior to the event) that we all keep details about the event itself secret.  While it wasn’t really crystal clear to me at the time, it sure seemed like, after the event, they were going to allow us to share all that we saw and learned.  In fact, right before I left the gate of the Nickelodeon studios I asked the question, “What can we now share?”  The answer I received to that question was in direct contrast with what everyone else at the event was writing in their post-event blogs (i.e., claims that they could not share any detailed information).   To further this argument, for those of you at the event, think back to all the areas, places, and things they DIDN’T let us see.  They wouldn’t let us visit the Executive Producer’s office, remember?  He so badly wanted us to see his TMNT stuff but they wouldn’t allow it.  He had to bring some items to the Q&A to share instead.  Remember how we were accompanied by staff members in suits at all times?  I’d say they didn’t allow certain things because, while they did want to reveal a lot of great information, they clearly did not want us to learn everything.  They wanted to keep some thing under wraps and knew that the best way to do this was to control what we saw.

END_OF_DOCUMENT_TOKEN_TO_BE_REPLACED

OK everyone.  So, if you’ve been reading the Technodrome in the past day or so you’ve seen snippets of information regarding information we all learned at the event.  One specific detail of Nickelodeon’s “re-imagining” of the TMNT is possibly controversial and some that were at the event called this the “deal-breaker.”  Now, while this information was a bit shocking at first, I’m going to withhold my opinion for the time being and, instead, put it out there for your decision.  Wait…what?  That’s right…I’m going to tell you.

In Nickelodeon’s “re-imagining” of the TMNT April O’Neil is no longer an adult…she’s a teenager. She’s not a news reporter or, at least from what we saw, a computer programmer but instead a normal teenage girl.  In addition, the TMNT all seem to have a “crush” on her, but this is especially true for Donatello.   The reason?  Well, given today’s politically correct climate, it seems that Nickelodeon was concerned about having an adult hanging out with teenagers and that it might send a weird message.   Also, given that Nickelodeon programming is geared to kids and teens, having a character that girls can relate to was also part of their thinking.

END_OF_DOCUMENT_TOKEN_TO_BE_REPLACED 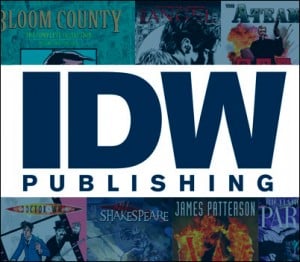 At the Nick TMNT event on Wednesday they asked us all to take some index cards (with new TMNT logo on them) and then write down any questions we had as the event went along.  One question I had (but that went unanswered due to time limitations) was in regards to the future of TMNT comics and if there was a plan.

Well, in case you haven’t heard, IDW announced yesterday at WonderCon that they’re partnering with Nickelodeon to begin publishing new comics as well as re-printing some of the old ones.   You can read more about it on the IDW site:  http://www.idwpublishing.com/news/article/1677/y questions we had as the event went along.  One question I had (but that went unanswered due to time limitations) was in regards to the future of TMNT comics and if there was a plan.

END_OF_DOCUMENT_TOKEN_TO_BE_REPLACED

Hey everyone…so, the big news from last week is that I was one of the 12 TMNT fans invited to attend a TMNT Fan Preview Event in Los Angeles on Mar. 30 for a sneak peek at the new Ninja Turtles content from Nickelodeon.   The event was awesome and over the next few days I’ll be posting all sorts of information that I learned from at the event so stay tuned!  In addition,  getting to meet the other 11 TMNT fans (a few of whom I’ve read and followed online for years) was pretty incredible, too.   Combine it all together and you have one seriously cool event.  I’m very much looking forward to sharing my experiences with you all!  Thanks for reading and following my blog.

This is a picture of the swag box that Nickelodeon had delivered to my hotel room in Burbank.  Inside were all sorts of goodies (mostly snacks).  It’s basically a decorated hat box and it was quite interesting getting this thing back home on the airplane (but that’s a story for another post). END_OF_DOCUMENT_TOKEN_TO_BE_REPLACED

Welcome everyone to the newly re-designed  TMNT…a collection blog.

Keep an eye out here for some great TMNT stuff in the coming days, weeks, and months…it’s going to be an exciting year!