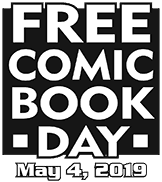 The Teenage Mutant Ninja Turtles are returning to Free Comic Book Day in 2019 with TMNT: Casualty of War, a GOLD Sponsor book.  Read more details about the book as well as FCBD 2019 below.

The road to Teenage Mutant Ninja Turtles’ 100th issue begins! New York City has just erupted into war as Splinter battles Karai for control of the Foot Clan with the Turtles caught in the middle! Find out how the Turtles got to this point as they battle some of their fiercest foes in this special FCBD offering!
Rating: Teen

The Free Comic Book Day (FCBD) Committee has selected the twelve Gold Sponsor comic book titles for the comic book industry’s most anticipated annual event: Free Comic Book Day! FCBD happens each year on the first Saturday in May at participating comic book shops worldwide, with next year’s event taking place on May 4, 2019.

“The quality of titles from publisher applicants made for some tough choices,” said Ashton Greenwood, Free Comic Book Day spokesperson. “It’s a solid indicator that Free Comic Book Day is truly the greatest event to showcase the best and brightest titles you can find in comic book shops. We can’t wait to once again share the FCBD experience with fans and everyone who loves comic books.”

The full line-up of this year’s comic books will be announced later this week, when thirty-nine additional FCBD Silver Sponsor titles will be announced on Thursday, December 20. A complete listing of all fifty-one FCBD titles can also be found in the January issue of Diamond Comic Distributors’ PREVIEWS catalog, on sale at all comic book shops December 28, 2018.